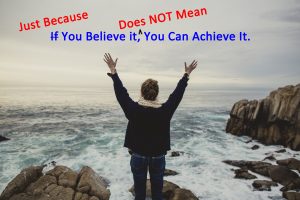 If you can believe it, you can achieve it. I see this posted over and over on social media and I want to scream, “What a load of crap.”

E. Frenkel, a Russian psychic, truly believed that he could stop a train with his psychic powers.  So he stepped directly in front of a freight train and tried.  He was wrong.  According to Frenkel, he had already stopped a bicycle, a car, and a streetcar and this was the next step. Unfortunately, a train cannot brake as fast as bicycles and cars.

Belief alone is never enough.  It needs to be rooted in truth.

I have a daughter who struggled with anorexia in the past and at time BELIEVED that she was fat. It would not be loving of us to tell her that if she believes it, then it is truth to her.

Because of her bipolar disorder she has BELIEVED that she didn’t deserve to live and that she would be better off dead.  Because of this belief, she has made a number of suicide attempts including one where I got her to the hospital with less than ten minutes to live.  She was in a coma for five days and when she awoke she was angry because she still believed it would be better for her to die.

While it is true that you will almost never achieve something if you don’t believe it is possible; just Believing it is possible will not make it so.  Far too many people waste valuable time and effort working toward something that is NOT possible.  For example, I know my limits and my talents.  While I love to sing, and do so every chance I get, I will never be a professional singer.  In every musical I ever had a part in, I got the largest non-singing part.  I was almost always the comic relief character.  I could take voice lessons and spend a lot of money trying to get better.  And I would probably improve a little but no matter how hard I believed it, I would never make it as a singer.

Years ago I would watch American Idol and I would see a contestant before the audition who was absolutely sure that they were going to get a golden ticket and go on to win American Idol.  When the judges told them that they did not have what it takes, they would get mad and promise to show them by becoming a star.  They truly believed that they could sing.  I assume that they then spent thousands of dollars on voice lessons and coaches.  Time and money wasted when they should have been working in their strength zones.

BTW on a related note:  Have you seen the the Scotia Bank commercial where they say, ” you’re richer than you think?” Well you’re not.

Greg Wood works with organizations that want to Levitate Their Business, Make Profits Appear, and Watch Problems Vanish!.
He can be reached by calling 1-877-299-0699 or by email at Greg@GregWood.ca   See http://www.themagicofleadership.com/